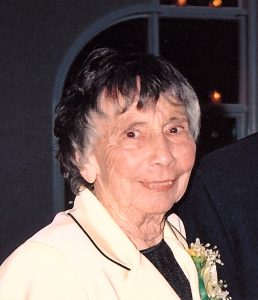 Mrs. Avonelle “Avie” Weaver, 99, passed away Monday evening, September 19, 2022, at Homewood Health Campus in Lebanon, Indiana. She was born in Decatur County, Indiana, on January 21, 1923, a daughter of the late Fay and Rebecca Pearl (Connall) Hiser.

On November 23, 1946, she was united in marriage to Jack Edward Weaver in Indianapolis. He passed away on March 30, 2007. They had celebrated sixty years of marriage before his passing.

Mrs. Weaver was raised in Decatur County where she was a 1941 graduate of St. Paul High School. The family lived in various Indiana communities and spent 1953–1956 in Miami, Florida. They moved from Bainbridge, Indiana to Lebanon in 2005. Mrs. Weaver was a licensed real estate agent for Cooney Real Estate from 1975 – 1982.

A devoted wife, mother, and grandmother, she loved her family dearly. In addition to her family, she enjoyed gardening and quilting.

In addition to her parents and her husband, Mrs. Weaver was preceded in death by three brothers, Walter Hiser, Wayne Hiser, and Esley Hiser; and three sisters, Irene Jones, Margaret Alexander, and Mary Lee Robinson.

Funeral Services are planned for 11:00 a.m. on Saturday, September 24, 2022, at Advance Community Christian Church, 305 IN-75, in Advance, Indiana.
Visitation will be held from 9:00 a.m. until the time of services at the church.
Interment will follow at Oak Hill Cemetery in Lebanon.

In lieu of flowers, memorials may be directed in her memory to the Advance Community Church.