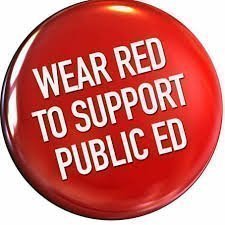 Nearly 20,000 teachers and their supporters took part in the Red for Ed rally at the Indiana Statehouse in downtown Indianapolis Tuesday as Indiana teachers began pressuring lawmakers for better pay, benefits and other improvements to the education system.

Around 140 schools across the state closed Tuesday so their faculty and students could participate. That’s 55 percent of the state enrollment. Some of the schools in the area who closed were Carroll, Clinton Central, Clinton Prairie, Frankfort, Kokomo, Lafayette and Lebanon.

“It was a great day of awareness for the people of Indiana and a great day to really together for something that we believe in,” said Clinton Prairie Superintendent Amanda Whitlock. “It was fantastic. There was well over 15,000 teachers there in a sea of red and white.”

Whitlock was one of about 25 teachers and administrators from Prairie that attended the rally.

The crowd heard from Indiana Superintendent of Public Education Jennifer McCormick who said that Indiana is 50 out of 50 states in teacher pay increase since 2002.

Governor Eric Holcomb and state legislators were not present during the rally. Holcomb is at a governors conference in Florida.

“The legislators did not speak to the crowd, intentionally I believe,” said Clinton Prairie High School Principal Kirsten Clark. “The Indiana State Teachers Association president stated that we were here to tell our story and to bring attention to our issues. This wasn’t the time for the legislators to speak.

Clark added it remains to be seen if their message was heard.

“I think it’s yet to be seen whether we accomplished our goals that were set when we want to the Statehouse,” said Clark. “I feel like we did bring more awareness to the issues to the community at large.”

Clinton Prairie Elementary School Principal Clint Wilson said there is still a lot of work that needs to be done.

“I think we made a statement today, but we also need to inform parents and the people that are going to be voting because we need to be looking at legislators and how they vote and the legislators who have the best interest of public education when they do vote,” said Wilson.