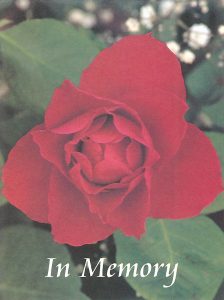 On April 24, 1945, in Pharr, Texas, she was married to Miqueas “Mike” DeLaRosa. They had celebrated sixty-seven years of marriage before he passed away on February 18, 2012.

Her life was devoted to raising her children, taking care of the home, and always praying for her family. In the early 1960s, she began employment with Commercial Filters Corporation in Lebanon, retiring in the late 1970s.

Visitation is planned from 11:00 a.m. to 1:00 p.m. on Tuesday, August 23, 2022, at Myers Mortuary, 1502 North Lebanon Street, in Lebanon, Indiana.
Funeral Services will be held at 1:00 p.m. at the funeral home with the Rev. Dr. Morris Jones, officiating.
Private Interment will take place at Lincoln Memory Gardens in Whitestown.

Memorials may be directed in her memory to Lebanon Wesleyan Church, 1004 South Lebanon Street, Lebanon, Indiana 46052.