Frankfort Mayor Chris McBarnes holds up the proclamation that was signing for Zonta and its 16 Days of Activism. 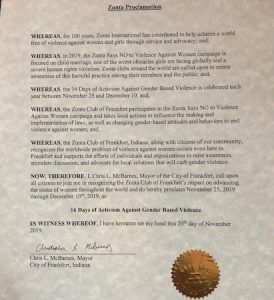 Mayor Chris McBarnes joined with members of Zonta for their proclamation signing Wednesday at Old Stoney. The proclamation talks about the group’s 16 Days of Activism which runs November 25 through December 10, which is International Day for the Elimination of Violence Against Women and Human Rights Day.

“Zonta Says NO to Violence Against Women” is a Zonta International campaign to raise awareness of and increase actions to end violence against women and girls around the world. The campaign began in November 2012 and orange was chosen to promote the message, as it is a dynamic and vibrant color and considered an optimistic symbol for a future free of violence for women and girls.

The “Zonta Says NO!” image can be seen on Paul Phillippe Resource Center vans throughout the year, and the Zonta Club will have several visual displays within the community during the campaign, including orange lighting at Frankfort Community Public Library and Old Stoney & on a special tree ((in memory of Frankfort Zontian, Martha Webb) at the Holiday Festival of Lights at the TPA Park. In addition, “Zonta Says No” signs will be located at various city and county buildings, along with some signs at businesses and in Zonta member’s yards. Who knows where else you may see orange during these 16 days!

Every year, over 10 million men and women in the US are subjected to domestic violence. Its impact can be felt far and wide:

For far too long, violence against women has continued. Zonta is helping to end this. Won’t you join in saying “NO!”?